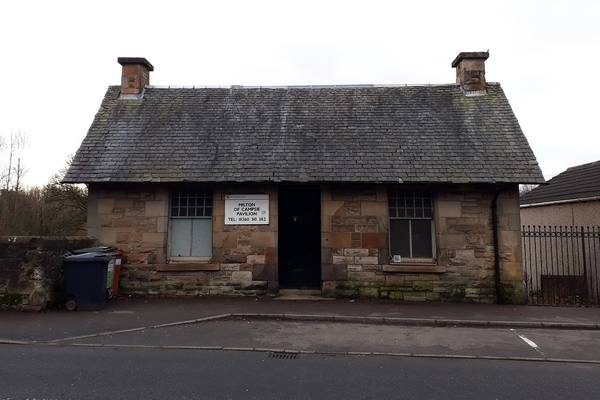 The old sandstone police station was probably built in the early 1900’s, the entrance on Campsie Road was the office and below were at least two cells according to stories (tales) from older residents they were frequently used, when Kirkintilloch was “dry” (no alcohol premises) to hold inebriated persons from Kirkintilloch until they had sobered up. The old police station has been used for a variety of purposes down the years, e.g. rent and rates collection office by the former Strathkelvin District Council on a Tuesday until the early 1990’s approx. Most of the residents of Milton of Campsie will know it as the changing room for local football teams which has been its main purpose in the village for many, many years.
Later a new police house/station was built in approx. the late 1950’s where the police officer and his family lived and to the side of the house was the police station. The local officer policed this area by walking and using a bicycle. The police station was at the corner of Beechtree Terrace and Birdston Road. It was sold in approx. the early 1990’s and is now a family home.


Next Tale on the Trail: Campsie Ware