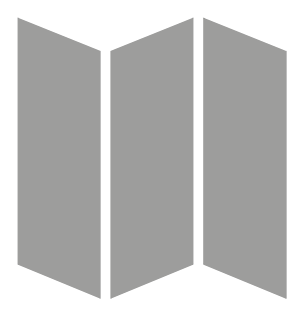 Route section 1 – North Milton of Campsie
The trail starts at Milton of Campsie Cross and heads west at the junction along Campsie Road. Continues on Campsie Road for 700m, heading steadily uphill until reaching a point where housing begins to end.
The route takes a left the immediate right on Valleyfield Road and onto an informal path at the end of the houses, which leads downhill towards the Glazert Water before joining onto the Strathkelvin Railway path which bridges the water.

On arriving at the railway path the trail turns left to follow the line of the water eastwards along the path. On reaching the disused Milton of Campsie railway station, steps can be used to ascend back to road level to continue the route or turn right along Birdston Road for the short distance back to the cross

Route section 2 – South Milton of Campsie
On Birdston Road above the former railway station, travel southwards taking the first road on the right. Follow Cairnview Road for 300m then onto a footpath, before the roundabout. The trail crosses Laburnum Drive and continues along the footpath to approach the moss. The trail then turns immediately left to follow the back of the housing.

Follow this path around the south-western edge of Milton of Campsie for approximately 1km before turning left shortly after crossing a stile. The path climbs here to the back of the housing then continues north to emerge on the drive to Kincaid House. The trail turns right to follow the drive to the junction with the main road, then turns left on to Birdston Road heading back towards the village centre.

Follow Birdston Road for 250m then turn right into Kincaidfield. Soon after passing the Bowling Club, a footpath on the left hand side takes the trail towards open amenity grassland to the rear of houses on Glenburn Crescent. The trail heads across the grassland area to a wooded area and path down towards the Glazert Water and the Strathkelvin Railway path. The trail turns left onto the railway path and follows it back to the site of the railway station from where the same directions as the north loop apply to return to the cross.

Red Moss
Explore the natural beauty of this area.

Scholars Rocks
Can you spot these colourful rocks on the banks of Glazert Water?

Notes
Found an issue on your walk? Let us know!
Report damaged or faulty QR plates by contacting us on: info@trailsandtales.org