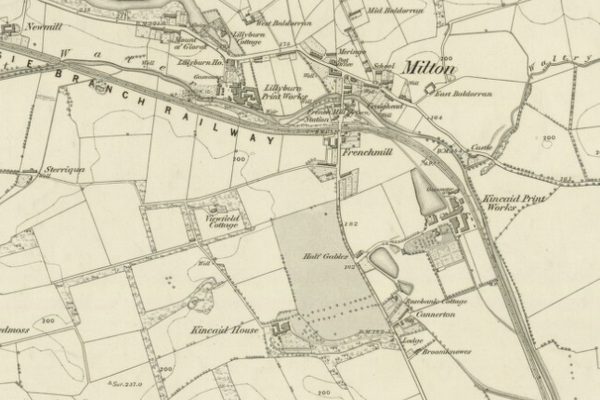 Kincaid House is a Grade A listed house, the oldest part dating from 1690 with the substantial construction made around 1812. It was the first building of significance by architect David Hamilton and the eastern block is said to have been inspired by the Castle of Inveraray, Argyleshire. Most of the current building was constructed in around 1812. It has a central staircase, a tower and four corner turrets.
When Lennox castle, also designed by Hamilton, was complete and ready for occupation, Kincaid House became surplus to the requirements of the united Kincaid Lennox family. The house was advertised for let in the Glasgow Herald in 1841 and stayed in the hands of the Lennox’s until 1921 when it was sold to the long term tenant, Mr Raphael.
Kincaid Country House is currently a privately run hotel.

Image reproduced with the permission of the National Library of Scotland


Next Tale on the Trail: Bowling Club