Toby Paterson is a visual artist born in Glasgow in 1974. He studied at Glasgow School of Art and the School of the Art Institute of Chicago, graduating from the former in 1995. Paterson won the 2002 Beck’s Futures Prize and received a Creative Scotland Award in 2006.

The forms and ideas inherent in architecture inspire his work. He has a particular interest in the post-war reinvention of cities under the influence of Modernism and is intrigued by what the cultural outcome of that influence has been. Paterson’s installations of painting and sculpture in galleries, museums and public space allude to existing sites, aestheticised approaches to the construction of architectural space and the social and political motivations responsible for creating the built environment.

Recent solo exhibitions include those at Le Grand Cafe, Saint Nazaire (2012); Galerie Lang + Pult, Zurich (2013); Galeria Mario Sequeira in Braga, Portugal (2013); The Modern Institute, Glasgow (2014); Edinburgh Sculpture Workshop (2015) and a Scotland-wide solo touring exhibition as part of Generation (2014). Collaborations include a multi-disciplinary collaboration with the Scottish Ensemble in Glasgow (2014); at the 2014 Venice Architectural Biennale in association with Reiach and Hall Architects and a two-person exhibition with works by Victor Pasmore at Durham Art Gallery (2012). Group exhibitions include those at Museo Tamayo, Mexico City (2012) and at the Hayward Gallery, London (2015).

Permanent public works have been commissioned for BBC Scotland’s headquarters in Glasgow (2007), on the campus of Warwick University (2008), and in the South West area of The Hague (2013). Paterson has also developed expansive works for the Docklands Light Railway’s Stratford International Extension in London (2012) and in Dunfermline town centre in Fife (2014). 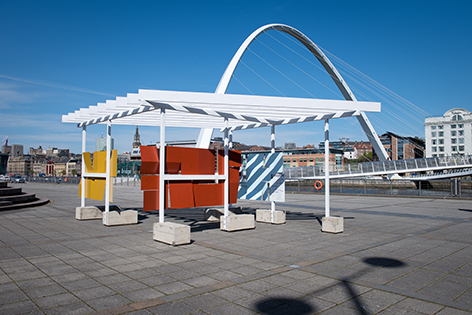