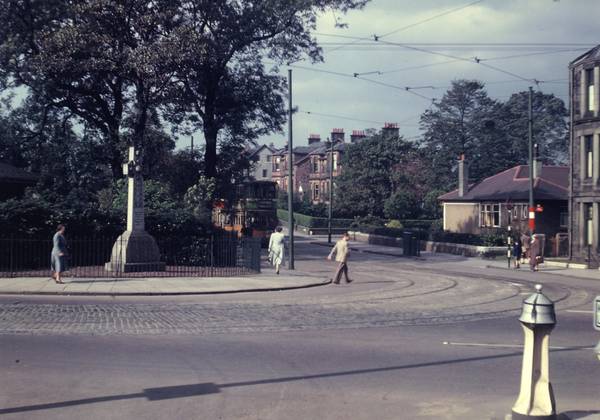 The War Memorial stands on the corner of Kirkintilloch Road and Kenmure Avenue at Bishopbriggs Cross. Originally behind railings, it is now on broad steps which allow easy access and space for wreaths. It is a grey granite Celtic cross atop a curved rectangular base. Two sides of the base list WW1 casualities, one side WW2 casualties and the 4th has the Lawrence Binyon poem “For the fallen”. The WW2 side also lists the 7 civilian casualties from the bomb which fell on Bishopbriggs on 7th April 1941. One of those listed as killed on active service was Wren Agnes Carlyle whose name also appears on the War Memorial in Torrance. She lived next door to Janet Primrose, one of the civilian casualties.

Next Tale on the Trail: Kenmuir Cinema