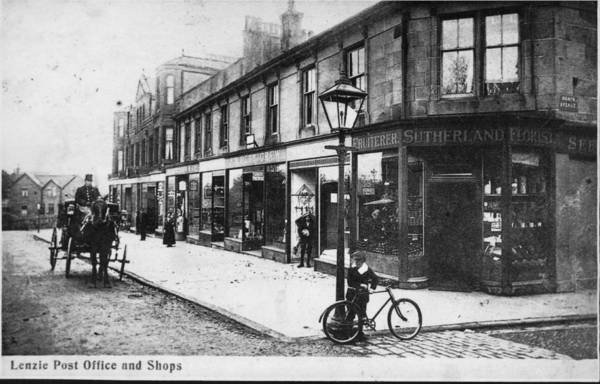 In 1865 local builder George Bennett built the two-storey terraced building of shops, with flats above, in Lenzie town centre. These became known as the Post Office Buildings; taking their name from the local Post Office that originally occupied one of the shops.
These buildings were built close to the station on Kirkintilloch Road to the south of Heath Avenue. At this time the population of Lenzie was small and businesses relied on passing trade from not only Lenzie residents but commuters going on foot to the train station from Kirkintilloch. By the 1870s Lenzie’s population was expanding and this meant more opportunity for local shops. A Mr. Benjamin Mackay opened a grocers here and the success of which led to him being able to build a new three storey terrace of shops. Alongside the original Post Office buildings, these became known as the Queen’s buildings.


Next Tale on the Trail: Old Parish Church