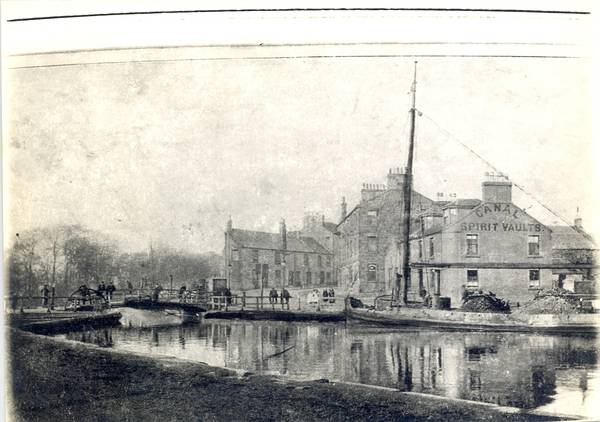 The idea of making a canal across central Scotland had been put forward as early as the reign of Charles II but nothing really was done until the middle of the eighteenth century. The Forth and Clyde Canal – The Great Canal, as it was called in its early days – was the result of a compromise between Edinburgh promoters, who wanted a canal “big enough to take seagoing costal vessels”, and Glasgow merchants, who wanted a smaller, cheaper canal. In fact the latter feared they would lose trade if the canal by-passed Glasgow, and so when a branch to the city was added to the plan they gave their consent. Work began on 10th June 1768. The canal was built from east to west, and the whole construction took 22 years, including a seven year break during which no work was carried out because of shortage of funds. The canal extends from the Forth at Grangemouth to Bowling on the Clyde, with a short branch to Port Dundas in Glasgow.
Kirkintilloch’s canal basin at Southbank was an important canal site. In 1826 the Monkland & Kirkintilloch Railway established a terminus at Southbank, for shipment of coal from the Monklands. The basin was laid out in the 1830s and iron foundries were later established nearby. Raw material and fuel were brought in and finished castings sent out by boat.

Next Tale on the Trail: Aqueduct