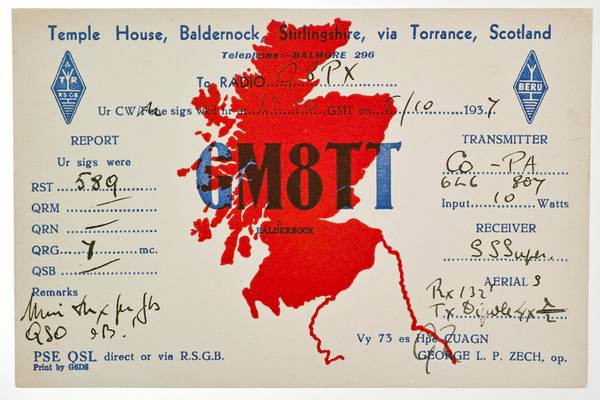 George Louis Paul Zech is remembered on the Baldernock War Memorial at the Church. As a teenager, George came with his family as refugees from Belgium, following the siege of Antwerp in WW1. His father, Paul Zech-Dupont, became managing director of Sandeman’s Varnish in Maryhill, Glasgow, and after being educated at Glasgow Academy and Glasgow Royal Technical College, George entered the business.

In 1937, George was living at Temple Cottage, Baldernock with his young family. By that time, George was a an amateur wireless expert, exchanging QSL (The term QSL comes from the international Q code and means “I confirm receipt of your transmission”) with other radio ham enthusiasts when radio contact was made. George was called up on the outbreak of the Second World War, having received a commission in the RAF Voluntary Reserves. He was a fluent linguist, having perfect command of French, Dutch, Flemish and German as well as English.

Flight Lieutenant Zech 73495 was a member of No. 3 Military and Air Mission, the elite Phantom squad; he was a “technical wizard” with wireless. He was drowned following the sinking of SS Aboukir by a German E boat, leaving Dunkirk on 28 May 1940, aged 39.