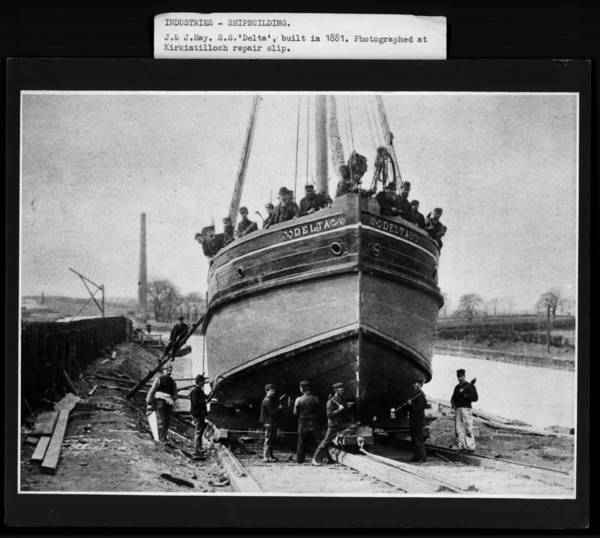 A boatbuilding yard was established beside Townhead Bridge, Kirkintilloch by Samuel Crawford, in 1866. Crawford launched only one ship, the lighter Rainbow, before relinquishing the yard to the brothers James and John Hay – otherwise known as J and J Hay.

J and J Hay began in 1867 at Townhead. They were mainly concerned with the construction of the famous ‘puffers’. Puffers were small steamships that carried cargo to and from the Western Isles. The name came from a puffing sound made by the vessels in their original form.

Puffers were made famous by the books and television programme featuring Para Handy and his puffer the ‘Vital Spark’. The 1953 film ‘The Maggie’ had a Kirky puffer as its star. Peter McGregor’s shipyard operated from 1902 to 1921 at the Canal Basin. During this period an estimated 118 vessels were built at the yard. The output included tugs, launches, ferries, puffers, pinnaces, barges, motor coasters and canal steamers. Some were exported as far afield as Russia, France, Chile, Brazil, Egypt and India.

Launches in Kirkintilloch were spectacular. As the canal is very narrow the ships had to be launched side-on (see above). Large crowds of people turned out to see the event, but those watching from the opposite bank had to be careful if they wanted to avoid a soaking.

Only small vessels could be built on the canal. With modern transport systems it was no longer economic to build ships there. Kirkintilloch’s last ship was launched from Hays’ yard in 1945.