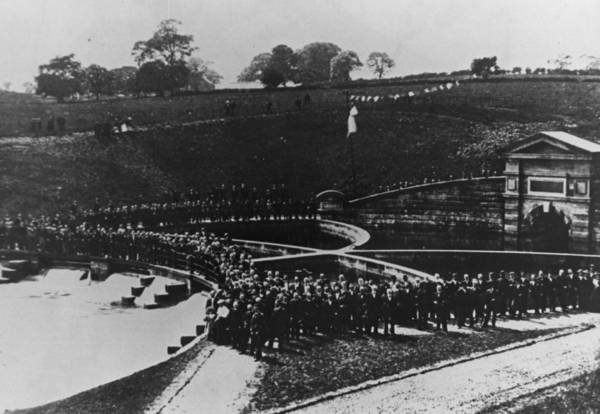 The reservoir in Milngavie is a major engineering achievement of the 19th century. Sensing the potential population expansion in the area, John Frederick Bateman, the engineer responsible, built to a large scale, employing hundreds of workers, many from Ireland, to build the dam.
The Glasgow Water Company had become very unpopular due to failing to provide pure water for the north of Glasgow as they had done with the south. In 1838 and 1848 cholera broke out in the city. The outbreaks were worse in areas not efficiently supplied with water
Bateman sought to rectify this by insisting on soft water being provided. The Reservoirs of Mugdock and Craigmaddie took water from two aqueducts at Loch Katrine. The reservoirs contained 5.7 million cubic metres of water; up to a 14 day supply to Glasgow and surrounding area at a rate of 50 million gallons per day. The waterworks were opened by Queen Victoria in 1888 and on the 11th of June 1896 the reservoir was filled.


Next Tale on the Trail: Tannoch Loch