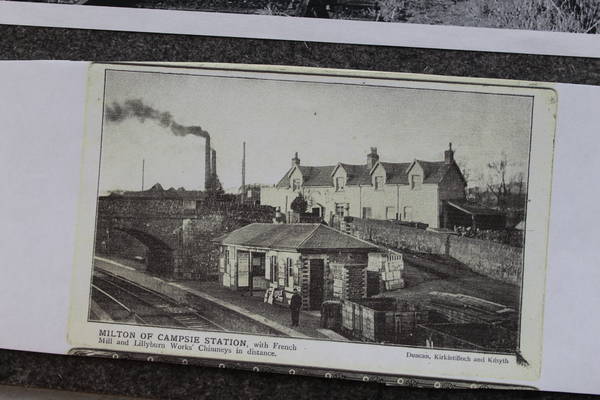 In July 1848 the Edinburgh and Glasgow Railway opened its Campsie branch line from Lenzie Junction through Kirkintilloch, Milton of Campsie to Lennoxtown to the foot of the Campsies, the line was 5½ miles long, it was publicised as the ‘picnic’ branch, many Glasgow residents had their first train ride and trip to the country. Eventually the line was amalgamated with North British Railway and continued over a period of years to expand eventually the line reaching Aberfoyle, due to later competition from buses, cars, the line eventually closed to passengers in Milton of Campsie in 1950 and to freight in the 1960’s.
The station and line in M. of C. became overgrown with weeds etc. and the community council asked for help to restore the area in Spring 2014. Since then the local community and others have continued to upgrade the area with plants & building works and it continues to this day, with monthly clean ups by many local volunteers both by the young and old of the village. The railway bridge was also reinforced in the 1970/80’s and more recently the railway pathway through Kirkintilloch, Milton of Campsie, Lennoxtown to Blanefield has been tarred – by the council through Sustrans – and is now part of the John Muir Way, and is excellent for all to escape to the country. Lastly, many thanks to the senior citizens Association of Milton of Campsie who donated Billy the Train at Milton of Campsie Station in memory of Councillor Charles Kennedy.


Next Tale on the Trail: Tartan Works