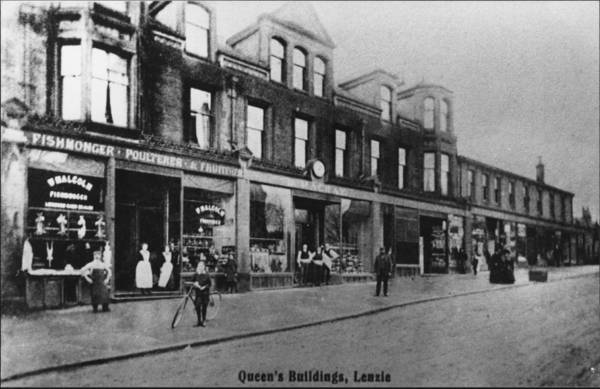 The Post Office buildings were the first row of shops in Lenzie. One of the shops in these buildings was a grocer’s shop owned by Benjamin Mackay. The shop sold such a variety of goods that it became known locally as ‘the store’. As shopping options were limited ‘the store’ became very successful and Mr Mackay decided to mark Queen Victoria’s Jubilee year of 1887 by extending the row of shops and adding another building.
This new building was called The Queen’s buildings and was built to the south of the existing Post Office buildings. These new buildings featured an large external clock, handy for those travelling to the nearby train station.
The first occupants of the Queen’s Buildings included James Stoutt and Co. Fishmongers, John McKinnon, Dairyman and the Commercial Bank.


Next Tale on the Trail: Old School House & Bowling Club