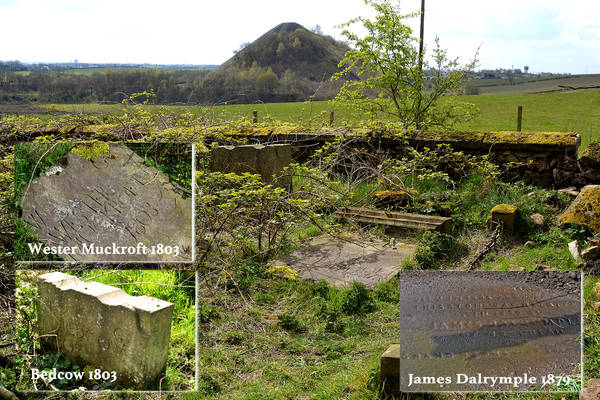 Did you know there was a Quaker Cemetery at Waterside?
Waterside and the surrounding areas where I spent my childhood in the 1950’s was a wonderful playground. Little was I to know that discoveries made then would be invaluable in later years as my interest in local history increased. An excellent example is the Quaker Family Cemetery at West Gartshore. My friends and I were aware of it’s existence but knew nothing of it’s history. To us children it was only a clump of trees with crumbling walls and gravestones. To the west just across the meadows was our beloved Wallace’s Bing which was always at the epicentre of our adventures. It was not until many years later that I learned it was a Quaker Family Cemetery. In the late 17th. Century most of the farms in the area were owned by the Gray family and the cemetery was their final resting place. Whilst passing by one day in 2012 I noticed that some trees had been felled and the overgrown bushes cut back. This created a brief opportunity for me to explore and capture a selection of photographs of the Graveyard. Interestingly whilst the front of the stones had engraved the names of the deceased the rear sides had the names of the farms.

Quakerism came to Scotland in 1653, and was mainly centred around Glasgow. Kirkintilloch had a Quaker population, and land on the Gartshore estate was used to create the first Quaker Burial Ground in the town. The burial ground opened in 1674 and was in use until 1884, when the popularity of Quakerism in the area had declined.

Here’s another tale of The Luggie


Next Tale on the Trail: Subscription School