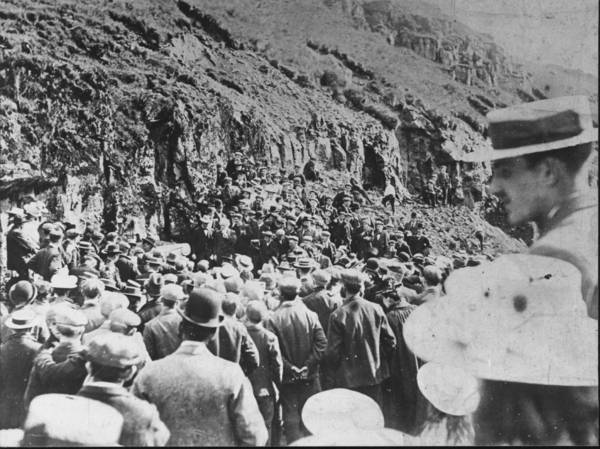 The road through the Campsie Fells to Fintry, known as the Crow Road, was built during the 18th Century to allow for advances in transportation; not only horses where travelling this route now, but vehicles too. There have been two Crow Roads, the first being a drove road which was used for the movement of cattle to be bought and sold. It is possible to still view the old road above the new.
After the “turn of the Crow Road” is Jamie Wrights Well. The Well was named after the Haughhead-born printer, Jamie Wright, who worked for Lennoxtown Calico Printing Works. On his way to fish in Fintry, Jamie came across a natural spring and made it into a rough Well to benefit other thirsty walkers. During the 1870s a man named Robert Gilchrist, assisted by local tradesmen, updated the Well to have a cistern and ladle to assist with access to the water. The local poet James Slimmon mentioned the Well in his poem “The Packman’s Salutation to the Mountain Well” adding to the local fame of Jamie and the Well. In 1899 friends of James Slimmon raised money to further improve the Well and erect a memorial. The monumental slab was made of Queenziemill stone and Petershead granite. It was unveiled on the 23rd June 1900, two years after the poet’s death.


Next Tale on the Trail: High Church & Grave Yard