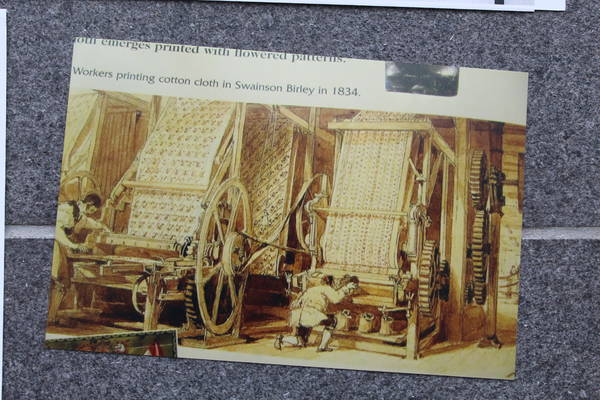 Calico printing originated through British trade with Calcutta in India. Calico printing consisted of four main processes, bleaching the material, printing the design, dying and finishing. Through out many hundreds of years its development has been influenced by many factors to produce the variety of textiles were have today. Milton of Campsie had three calico print works from 1740 through 1830 until the final closure in the 1920. These were
1) Glorat: Probably closed by 1790.
2) Kinkaid Printfield: From about 1800 to closure in 1901 with the loss of over 100 jobs, this is the area which is now Kinkaid Park near Beechtree Terrace.
3) Lillyburn: Probably opened around 1800 this was probably the most successful and many improvements were made to the factory and included a plentiful supply of water from surrounding area including Alloch Dam and Mount Dam via feus to the Glorat Estate. By 1900’s they employed about 300 people as well as 300 printing machines. Unfortunately due to conditions after the First World War and the depression during the 1920. The mill closed in 1929. Terminating the end of the Calico Industry in Milton of Campsie.

References
Much of this information was from Strathkelvin booklet Milton of Campsie: People & Places (1992)


Next Tale on the Trail: Railway Line & Station