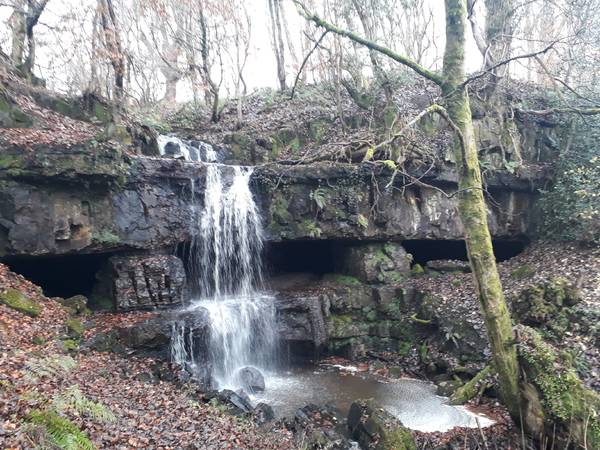 “The parish of Baldernock is possessed of a quarry which is equalled in very few places. The upper strata is a good clayey loam . . . below that is a stratum of excellent peat-moss, which makes good fuel . . . immediately under that is a bed of good limestone . . . that again is incumbent on a thick seam of excellent coal, which lies upon another seam of good limestone . . .” Belsches, 1796

Signs of the lime extraction quarrying and lime kilns, are visible in various parts of the countryside, such as at the Linn Cave, behind a waterfall. Generations of small boys have taken ropes and lanterns in behind the waterfall to explore the cave and to follow the tunnel. At Fluchter School, a new boy would be taken out during the lunch break up to the Linn and left to follow the others into the darkness, the friends then knowing a quick route out at the exit of the limestone workings in the field opposite the waterfall. The new boy would find he could not get very far into the tunnel, and on finding himself alone would have to make his own way back to school, late of course and in trouble!

Jump to the next Tale on the Trail: Bardowie Loch

Back to the Baldernock Trail page