Toby Paterson, Dug Macleod and Simon Whatley worked as a creative team to develop 3 art works for Lenzie. ’Stacks’, made of Black Basalt Aggregate Concrete (cast in collaboration with Gabion Designed Concrete Surfaces) are sculptural works made specifically for Lenzie Moss. These small cast sculptural objects act as a series of subtle route markers, rather as traditional milestones might. The intention is that they might become familiar ‘punctuation marks’ for those who walk and cycle the Moss on a regular basis, carefully located as they are adjacent to existing routes around and through it. The artists’ aim was to make a series of objects whose form is derived from the traditional peat stack, making reference to the historic approach to such landscapes as a resource as well as to more recent 20th century attempts to industrialise peat extraction from Lenzie Moss. They also reflect on contemporary concerns regarding the conservation of such unique natural sites and their vital environmental role as ‘carbon sinks’, this being achieved through the suspension of a carbon black pigment in the black basalt aggregate concrete from which each of the three unique objects are made. These small scale works, reflect the idea of ‘lures’ within the wider Trails and Tales project, and are not intended to perform any specific practical function beyond presenting intriguing forms that visually punctuate a walk on the Moss, but they are however of a height that allows a weary walker to take a momentary perch to catch their breath. 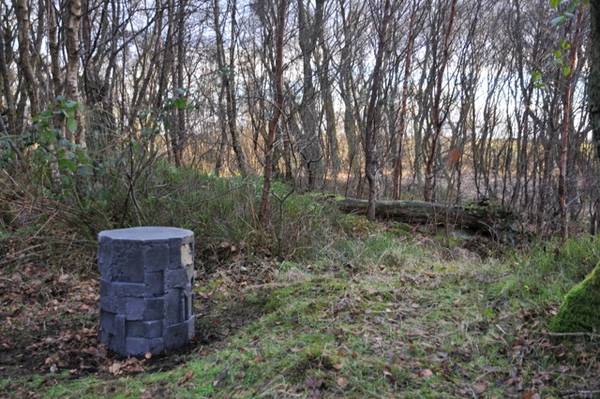