The artwork has been inspired by Kirkintilloch’s former metal founding industry with specific reference to the Lion Foundry (1880-1984), who specialised in ornamental castings. The factory was situated in close proximity to the canal at the Luggie Water Aqueduct, which was used for the import of raw materials by boat. Most famous for their red telephone boxes, as well as bandstands, gates and architectural facades, the Lion Foundry also produced ventilation gratings for international export – however, ironically the ventilation within the factory itself was very poor. The pattern developed for the artwork stems from an illustrated drawing of ventilation grating No. 781, found within a catalogue held at William Patrick Library Archives, which has been abstracted and fragmented across the 6 pillars. The mural has been painted using concrete stain, chosen for its transparency and colour layering properties. The pattern reflects its fluid mirror image in the canal, appearing and disappearing with the changes in light. 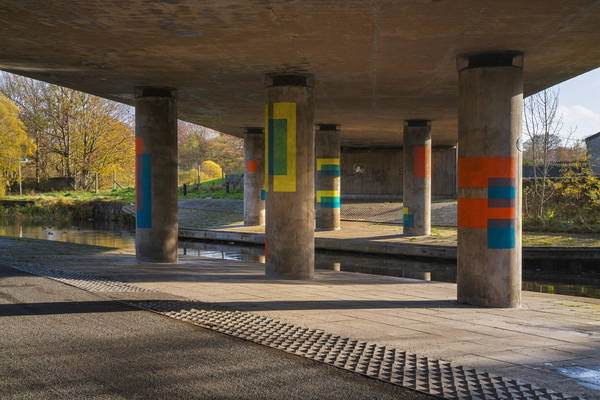 Abstraction (No.781) by Rachel Barron