Faces of The Auld Wives' Lifts

Katja Larrson’s work sited in Torrance, is a response to Craigmaddie Muir, where there is a mysterious set of standing stones known as the Auld Wives’ Lifts. Legend has it that three old women from Campsie laid a wager on who could carry the greatest burden, thus each carried a stone in their apron and laid them in position. When visiting the stones, the artist was struck not only by the sheer scale of the monument, and questions of how it got there but also by the many human interventions in the surface of the rocks. The stones are covered in scribbles, antique carved graffiti carrying messages of love or simple signatures saying “I was here”. Even more mysterious are the many faces looking back at you. While some of the writing is signed and dated, the faces are not. Faces of the Auld Wives’ Lifts were cast directly by Katja from the stones and set into the ground of Torrance Ornamental & Demonstration Garden. Their placement plays with ideas of archaeological discovery, and being situated discretely at ground level, they invite visitors to stoop down and contemplate their expressions. Cast in rust red Jesmonite, their iron colour was chosen to reflect the industrial legacy of East Dunbartonshire and stories of rust red rivers that ran through the surrounding landscape. 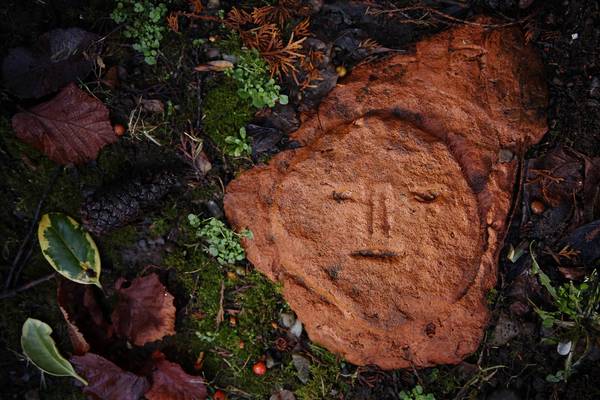